The 1983 Toyota Sprinter Trueno AE86 is a Japanese hatchback car in the Ultimate Driving Universe. It can be bought for $16,000 and was added in the January 2018 mesh update along with 16 other vehicles. It is known as the 1983 Akio Tiara GT 83 in-game.

Ingame, the Akia Tiara GT 83 mesh is based on the AE86 generation of Toyota's Corolla and Sprinter vehicles, which was produced from 1983-1987. It has a black hood and features pop-up headlights.

The AE86 model in-game is based on the 3-door Trueno Zenki model. To more easily break this down, the AE86 had 3-door liftback and 2-door coupe body styles. It also had two differing models -- the Trueno and the Levin. The Trueno is the model with retractable headlights whereas the Levin used fixed headlights. The Japanese terms Zenki and Kouki refer to early and late models respectively, as the Zenki AE86 models had a more "round" front bumper, but the Kouki had a more extended and "pointed" appearance, combined with new rims and the addition of a spoiler. In real life, the car is powered by the 16-valve blue-top version of the Toyota 1.6 L 4AGE, making 128 HP. North American specification models are different from Japanese and European models, due to having a longer front bumper and power reduced to 112 HP. The AE86 variants of the Corolla and Sprinter were the final generation to be rear-wheel driven, as all future generations would be front-wheel drive. 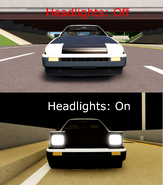 IiTomsx posing in front of an AE86 and a GMC Syclone.

Add a photo to this gallery

Retrieved from "https://ultimate-driving-universe-community.fandom.com/wiki/Akio_Tiara_GT_83_(1983)?oldid=81949"
Community content is available under CC-BY-SA unless otherwise noted.