The Nissan Skyline R33/BCNR33 is based upon the 6th generation edition of the Nissan Skyline Series, and the 4th GT-R package variant of the Skyline. It was introduced in the August of 1993, and had coupe and sedan body styles. The GT-R, however, was introduced in 1995. The R33 also had a NISMO LM variant, with only 108 sold. The model present ingame is the E-BCNR33 V-spec model, due to the car's lower ground clearance, and slightly grippier handling model.

In November 3 1997, Nissan released the special edition 400R R33, planned by NISMO and produced by REINIK, the 400R feature a RBX-GT2 engine, A bored and stroked RB26 featuring a 77.7 mm stroke crankshaft (7.37 stock forged) 87 mm piston (86 mm cast stock) upgraded rods, polished ports, high lift camshafts, upgraded oil system, larger exhaust manifolds and higher output turbochargers. NISMO produced an upgraded exhaust, a twin-plate clutch, and intercooler system. Nismo brake pads were fitted to the car. 400R exclusive aerodynamic updates were also added, such as wider bumpers, side skirts, a new rear bumper, a new front bumper with bigger air scoops, and a redesigned bonnet and rear spoiler made of carbon fibre. The 400R was also fitted with 18x10 Nismo LM-GT1s. The engine developed 298 kW (405 PS; 400 hp) and 347 lb⋅ft (470 N⋅m), which allowed a top speed of over 300 km/h (186 mph), and enabled it to accelerate from 0–97 km/h (0–60 mph) in 4.0 seconds. NISMO had originally planned to produce 100 units of the 400R, however, only 44 units were made before production of the R33 ended in 1998.

The Skyline R33 GT-R is a decent, if not good, JDM car. Its 0-60 is extremely quick, but its top speed leaves much to be desired. The car has a midsize turning circle, and does recover from power-sliding easily due to the ATESSA ET-S system. However, the launch is slow, even though it is an AWD car. 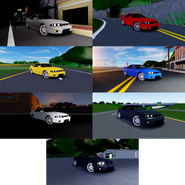 Add a photo to this gallery

Retrieved from "https://ultimate-driving-universe-community.fandom.com/wiki/Gojira_N4_Dawnbreaker_V-S_(1997)?oldid=81898"
Community content is available under CC-BY-SA unless otherwise noted.