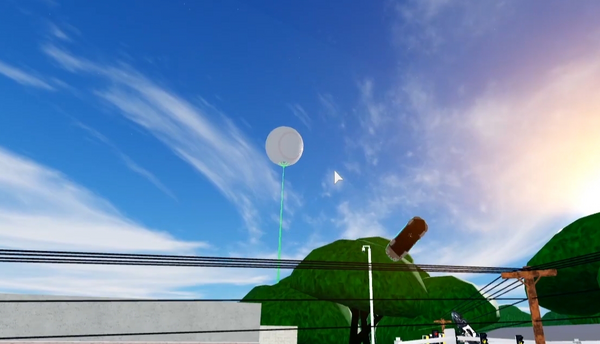 Attention: If you are coming here to ask us to unban you in the comments, please DON’T. We are not UDU moderators; therefore, we will be unable to appeal a ban for you. If you would like to appeal, join the Discord server located on TwentyTwoPilots’ Twitter account. It is a pinned tweet.

Note: Discussions of bans or sightings of the OBS may be posted in the comments.

The Orbital Ban Star is a tool that is used to kick or ban someone from the Ultimate Driving Universe. This tool is only in a menu called "Admin Panel" which can only be used by Admins and Moderators. This tool is a satellite that hovers far above the universe maps. The Ban Cannon is only used if people are caught violating the rules in front of a moderator or admin, disrespecting the staff or if an automatic ban is issued. Most players will only see it in action if moderation is in the game. If someone is banned by the Orbital Ban Star, a notice will show "[player name] has felt the wrath of the Orbital Ban Star."

This tool replaced the Orbital Ban Cannon, which was used to ban players from early 2016 to late 2017.

The Orbital Ban Star is usually used when someone breaks the rules. Here is how it works:

What do players see?

Players that are banned will be disconnected from the game, then receive a notice outlining the violation and the length of the ban. If a banned player attempts to join any UDU game, they will be immediately disconnected until their ban expires. Banned players will also be forced to close the Roblox game client after receiving the notice.

If you are kicked from a game by an admin or moderator, you will also be disconnected and receive a notice stating the reason why you were kicked. However, you can rejoin the game immediately.

If you get banned, the best way to appeal is to join the official Ultimate Driving Discord server. Once you have joined, you will need to locate the channel where you can appeal.

Note: Please do not use the UD Unofficial Fan Wikia Discord server to appeal as we cannot help you there.

In addition to appealing through the Discord server, you may appeal through the UD Forums.

Note: This doesn’t always work. You may be declined in your appeal, and it could possibly result in a permanent ban that cannot be resolved. The UD Forum moderators also barely check ban appeals. If the admins and moderators decide to add an extra punishment (such as loss of in-game money, etc.), you will also be subject to it. In addition, repeat violations of the forum rules may also affect your in game account and you may be banned from playing if you have been banned from the forums.

Please don’t try and get yourself banned. Some actions could result in a permanent ban or something else that is just as bad as that. You’ll only make yourself feel bad, as Ultimate Driving is a game everybody should enjoy, and you shouldn’t ruin it by doing something that deserves a ban.

What may trigger the OBS?

This information is important to note, so please DO NOT ATTEMPT THIS IN GAME:

Violations that may result in a ban

Violations that will result in a ban

If you want an actual clip of someone being banned, why didn't you say so! You're in luck, here are some!

And all the videos are not by the wiki, they belong to TwentyTwoPilots and BengalShark!

Retrieved from "https://ultimate-driving-universe-community.fandom.com/wiki/Orbital_Ban_Star?oldid=80429"
Community content is available under CC-BY-SA unless otherwise noted.