Australia
The 2009 Pontiac G8 is an American sedan in the Ultimate Driving Universe. The car was added on February 16th, 2018 as a free car for all players due to the Philadelphia Eagles winning the Super Bowl of 2018 (Later becomes Purchasable vehicle as of Starter cars update). It currently can be purchased for $26,000, and is known as the 2008 Tomahawk Wolverine in-game.

The G8 is based on the Pontiac vehicle produced from 2008 to 2009. It is a re-badged version of the Australian-built Holden VE Commodore, later being rebadged and exported to North America as the Pontiac G8. The car's appearance is based on the top of the line GXP trim, powered by GM's 6.2L LS3 V8 engine from the Chevrolet Corvette C6, making 415 hp. The car also features a more performance-oriented suspension setup and ventilated Brembo disc brakes. It is the first Pontiac added to the game, as well as also the first Australian-produced car in the game. 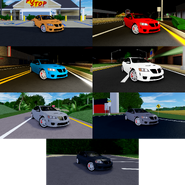 A Pontiac G8 outside the Odessa Church (UD: Odessa).
Add a photo to this gallery
Retrieved from "https://ultimate-driving-universe-community.fandom.com/wiki/Tomahawk_Wolverine_(2009)?oldid=81907"
Community content is available under CC-BY-SA unless otherwise noted.